From PeterMastersWiki
(Redirected from Predicament bondage)
Jump to: navigation, search

Predicament bondage is a style of restraint or bondage in which a submissive only has a limited range of positions they can adopt, each of which has some penalty associated with it, such as being painful, being embarrassing or humiliating, or being tiring. The predicament is along the lines of "finding the lesser of all evils" where the "evils" are the possible positions and where each possible position has something going against it. The challenge then is for the submissive to make the most of the situation in which their dominant has placed them using their skill, intelligence, physical strength, and endurance.

In general, the dominant creates a scenario which allows the submissive a limited choice of positions (frequently just two), none of which are completely comfortable, satisfying, pain-free, or penalty-free. 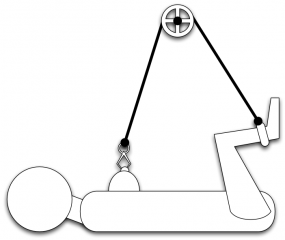 Figure 1. An example of predicament bondage. Here we have a submissive on her back with nipple clamps on her nipples connected to her ankles via a cord going over a pulley above her. If she lowers her feet she pulls painfully on her nipples. If she keeps her legs up they get tired. 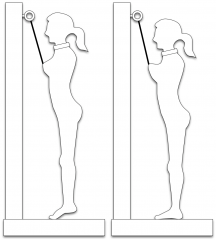 Figure 2. Similar to the situation above, the submissive's nipples are attached to a bolt on the wall above her with a short cord or chain. She can either have her feet flat on the floor with her nipples being pulled painfully upwards (right), or can stand on her toes to relieve the pull on her nipples and get tired feet (left). 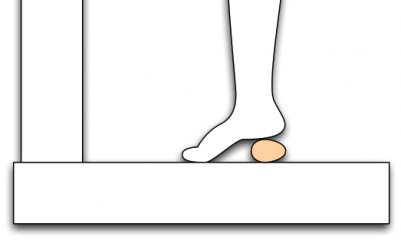 Figure 3. Instead of having something tug on her nipple if she stops standing on her toes, you can place something under a submissive's heel. Here we see that an egg has been placed under her foot so that she has an inevitable penalty of having to clean up a broken egg. The challenge then becomes how long she can avoid this outcome (or if she can somehow work out how to avoid breaking the egg at all!)

In any predicament bondage scenario, there must be things which motivate the submissive. The situations their dominant creates for them usually have to do with a conflict between some or all of the elements below:

How this conflict is used is another factor in the design of a predicament bondage scenario. Is it going to be constructed so that the bottom or the submissive might "win"? In other words, is there a chance that the submissive will solve the dilemma and completely free themselves? If this is the case, then there can be a deep sense of achievement, particularly if they see that escaping the predicaments pleases their partner. This can be very engaging and rewarding for both the dominant and the submissive, where the dominant sets the challenge and sees his or her submissive rise to that challenge.

Figure 1 shows a good example of simple predicament bondage. The submissive has two possible positions. The first is where she has the weight of her legs pulling painfully on her nipples, or the second is where she is uncomfortably holding her legs in the air. One position involves pain, the other fatigue. Holding her legs up is not something she can sustain and she'll likely end up switching back and forth every minute or so between enduring nipple pain to rest her legs and enduring leg fatigue to relieve her nipples.

Figure 2 is a vertical variation of the first example and again shows two-position predicament bondage where the submissive either has to stand on her toes to release the tension on her nipples, or has to have her nipples painfully pulled upwards as she rests her feet and ankles.

Four frequent elements in predicament bondage scenarios are fatigue, pain, embarrassment, and humiliation. We've seen examples of the first two of these in the scenarios given above. Embarrassment and humiliation can also be very effective, particularly when your bottom is self-conscious and you are at a play party. Creating a situation where they must either be experiencing extreme discomfort physically, or be exposing or presenting themselves (naked) in such a way as to be highly embarrassing can be just as much a predicament for them as any other scenario.

While pain and fatigue are common elements of predicaments in predicament bondage, these need not be the only motivators. Punishment can also be one aspect of the predicament. However, if punishment is always the outcome then any submissive can become unenthusiastic or even bitter. There needs to be some likelihood or possibility of a good or rewarding outcome.

For example, failing to achieve a certain level of endurance, such as not being able to hold a certain position for a reasonable time, can be a reason for punishment. The submissive knows that if they reach that time then there will be no punishment, and maybe there'll even be reward or praise from their dominant.

The glass of water idea mentioned above can work well here. The amount of water remaining in the glass when the ropes are removed determines how many strokes of the cane the submissive receives: a full glass (no spills) means no strokes while an empty glass may mean six of the best.

Making an effort under orders

Another motivator in predicament bondage can simply be that the dominant has ordered the submissive to do it. For many service-oriented submissives this can be entirely sufficient, and they can get a real buzz out of striving to achieve more and more as part of their service.

Indeed, it can be the case that such a submissive relishes the opportunity to be challenged by their dominant and to grow and improve in their ability to respond effectively to the situations in which they're placed.

Having a goal to aim for, such as increasing their endurance, can be something that helps the submissive feel better about themselves and can even be something they use to measure their "submission".

Making an effort to please the dominant

Making an effort to please their partner can also be a powerful motivator for some submissives. Seeing the pleasure that they give their dominant by being both challenging and skilled at devising escapes from different predicaments can be very rewarding.

When planning predicament bondage you should work out in advance how many positions you are going to allow your submissive and what they'll experience in each. Remember that any of the following can be elements of effective predicament bondage:

Any of the situations I've mentioned in the scenarios above are good candidates, and as we've seen muscle strain and fatigue can be very effective parts of predicament bondage.

Blindfolds can be a very effective element to predicament bondage. It adds a level of difficulty to most scenarios because the submissive needs to experiment and try things out to work out exactly the nature of the situation they're in before they can try to work their way out of it.

Another type of predicament bondage involves what can be called unrecoverable predicaments. These are situations where there are two possible positions. The initial position is, or becomes, very uncomfortable, unpleasant or painful. The second position is typically uncomfortable or painful, possibly more than the first. It may also simply be undesirable because the dominant has ordered the submissive to avoid it. Switching from the first position to the second is often easy, however it's also only one way. Once the submissive has changed to the second position they can't switch back.

For example, imagine a submissive who is tied vertically to a frame. Very heavy weights are attached to her nipples or labia using clamps, heavier than she could comfortably bear. However, the weights are also attached to a cord which she holds between her teeth. While she holds the cord in her teeth, the full force of the weights doesn't pull down on her nipples/labia. But once she lets go of the cord with her teeth, she can't get it back again because she is tied up. So, once her mouth or jaw become too fatigued holding the cord, she ends up in a whole world of other pain from the weights.

Another unrecoverable predicament could be the one shown in figure 3. The egg under the submissive's foot, once broken, can never be unbroken. There's also the small matter of cleaning up the mess, as well.

Finally, the example given above of the submissive, whose hands are tied behind her back, being told to hold a coin against a wall with her nose is another unrecoverable predicament. Once the coin drops, she can't put it back again.

If you're going to be using nipple clamps, it's a good idea to review the article on nipple torture for some comments about keeping nipples safe and healthy.

There is often a risk of muscle cramps, muscle strain and even joint dislocation in predicament bondage, especially when you have your submissive in an awkward position and they struggle. Keep this in mind when you're working out positions.

Perhaps even more than in an immobilising rope tie, it can be very important to include one or more ways of quickly releasing your submissive in your predicament bondage designs. A submissive may get themselves into a dangerous situation as they twist and turn in the ropes, or they may simply get a cramp from holding an awkward position. In any case, you need to be able to release them in a hurry. If nothing else, keep a pair of trauma shears handy.

Other safety notes can be found here.