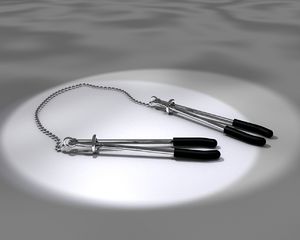 The sorts of clamps shown here are most commonly used on nipples. A clamp is placed so that one nipple is between the two black plastic tips. As the ring is then pushed towards the tips, they press more and more tightly on either side of the nipple. There are two clamps because, of course, most people are equipped with at least two nipples. 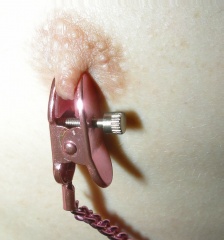 Close-up of an alligator-style clamp on a nipple. These can also be used on labia and anywhere there's loose skin (e.g., testicles). This style of clamp has a spring in the hinge (out of sight) to close the jaws and an adjustable screw to limit the strength of the bite

Clamping is any activity where a clamp, clip, or peg is used to pinch or squeeze some portion of the anatomy.

Where clamps can be attached

Generally, for a part of the body to be considered for clamping there needs to be a certain amount of loose flesh which can be bunched up and pressed between the two arms or fingers of the clamp or peg.

Less common, but still effective body geography which can be considered include:

Removing a clamp or peg

Once a clamp or peg has been in place for a while, removing it can be a painful experience. The skin becomes sensitive and tends to "stick" to the clamp or peg as it is remove.

For some aficionados, this leads to something called zipping. This is where a line of pegs are clamped in a long row or flowing design (often to the belly or possibly the inner thighs), with a single thread of string passing through each peg. When the string is tugged, the pegs are pulled off in rapid succession (hence "zipping"). Thus there isn't just the brief pain of one peg being removed, but a whole series scoring a line or pattern on the bottom or submissive.