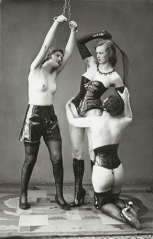 Of course, this is totally real!

To keep the wolves from the door he beats computer networks into submission at a local university. He has had a keen interest in computers and computer programming since he was 12 years of age, and has been fortunate to be able to make a career out of one of his life-long passions.

Peter is an experienced trainer, runs workshops and classes on things straight and twisted, and for a number of years also ran a discussion group on dominance & submission. 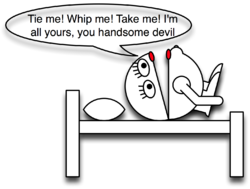 As a result of seven and a half years living and working in Europe, and through much hard work, he speaks both Italian and German ﬂuently.

He lives in Sydney, Australia, rents a nice apartment near a fire-station, and is a devout heterosexual. Highly attractive young women with large assets should not hesitate to contact him via email.

Peter enjoys the parry and thrust of enthusiastic debate, discovering or learning new things, and writing enthusiastically about himself in the third person for the about-the-author pages of his books and website.