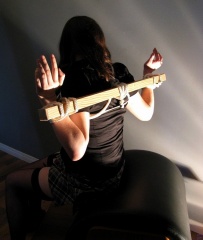 Figure 1. Do-it-yourself behind-the-shoulder spreader bar made from a simple length of wood 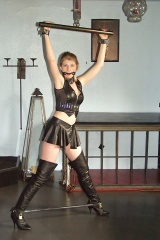 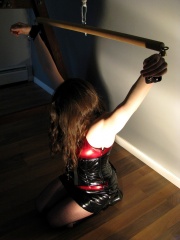 Figure 3. Home-made spreader bar used to suspend a submissive's arms above her head while she kneels

Spreader bars are short metal tubes or wooden rods with anchor points or cuffs at each end. They can be used to hold a submissive's or bottom's wrists apart, often as part of suspension as shown in figures 2 and 3 below, or to hold their knees or ankles apart---particularly in some bondage scenes---to allow their partner unrestricted access to their genitals or other interesting bits of their anatomy.

When on the knees or ankles spreader bars serve to give or increase the feeling of helplessness or powerlessness which a bottom or submissive can feel while restrained.

From a purely practical point of view, for the top or dominant spreader bars work well to make sure their partner's legs stay put. Many spreader bars have additional anchor points (often in the centre) to which rope or chain can be attached to lift the spreader bar (and thus also the attached knees or ankles) into the air.

Figure 1 shows an example of using a simple, unadorned piece of wood as a spreader bar. Friction between the rope and the wood will keep the rope from sliding off the ends. While it's not clear in the photograph, the middle of the piece of wood is tied to a chest harness made out of rope running around the submissive's chest and over her shoulders.

Going a little more sophisticated, you can drill parallel holes in the middle and at each end of the rod or dowel and then mount an eye bolt from your local hardware store in each hole as shown in figure 4 (below). The two end ones should come out the same side and the middle one should come out on the opposite side.

A good length for a spreader bar is about 3 feet. That's about one metre.

A spreader bar for the fingers and toes

Mostly when people talk about spreader bars they are referring to ones for arms or legs. On a smaller scale though, a single chopstick can make a good spreader bar for the fingers of a hand, i.e., you tie each finger individually along the length of the chopstick. It also works for toes.