Sensory deprivation is what we could call a specialisation of sensation play. It is where the effectiveness of one or more of a submissive's or bottom's five senses is reduced or removed completely such as through the use of a blindfold or earplugs.

The five senses are, of course:

Why use sensory deprivation?

Sensory deprivation allows the top or dominant to control the situational awareness of the submissive and make them feel vulnerable, isolated, helpless or apprehensive. There can be a strong element of surrender to this because the submissive often must simply accept that they are subject to whatever their partner wants them to experience.

There are a number of reasons why you might want to use sensory deprivation:

Firstly, and as already noted, sensory deprivation makes it hard or impossible for a submissive to discern what's going on around them. This means that it's correspondingly easier for a top to psychologically manipulate them.

For example, mind fucks commonly involve sensory deprivation, such as in suspension bondage where a bottom is tied and then hoisted above the ground. When the bottom is blindfolded they can be lead to believe that they're higher above the ground than they really are. This can increase their apprehension quite significantly, and can make for an "interesting" outcome if they are suddenly dropped to the ground from only a few centimetres when they though they were much higher.

Secondly, many bottoms can have trouble surrendering to the experiences their tops create for them because they like to see what's going on. Of course, there's an aspect in this of them trying to stay in control. Blindfolding the bottom takes this control away from them making their surrender much more likely.

Thirdly, depriving someone of one sense tends to heighten their awareness of their remaining senses. This can be very useful in sensation play where, for example, a top may use earplugs or a blindfold so his partner focuses much more on how he's touching her.

Fourthly, when the experience of power is one of the drivers for the dominant and their submissive, sensory deprivation creates a deliberate power imbalance---such as where the dominant can see what's going on and their submissive cannot---which the dominant can exploit to enhance the feelings of control and power. We can contrast a benign use of sensory deprivation where a top blindfolds their bottom and then, say, drips molten wax on them, to something more intense and penetrating where a dominant blindfolds his submissive and then physically engages them and man-handles them through something more complex, such as a combined bondage and flogging scene, where the submissive feels helpless, vulnerable, and must be be guided through what they need to do.

Fifthly, objectification can be a significant part of sensory deprivation for some submissives. Objectification often has to do with creating a situation where a dominant or top interacts with their partner less as a human. Using bondage to tie a submissive in the shape of a table and then gagging them means that they become functionally effective only as a table because they can't do anything else. By taking away someone's senses you also reduce them in this way because they can no longer interact with others as a full human. They become, in some cases, simply a lump of meat to push around or use because without their senses that's all they can be.

Objectification changes the perceived value of the submissive and one of the powerful aspects of this is that this value is under the control of the dominant who objectifies them. The dominant decides when and for how long this value change applies.

Sixthly, for the submissive sensory, deprivation can create a sense of detachment or separation from their surroundings and from what happens to them. This is particularly applicable with sight and sound deprivation such as when using a hood or earplugs. It can create a feeling of distance or anonymity and allow a submissive to experience whatever else happens to them, such as via touch, without the same feeling of connection to their partner as they might have with full sight and sound. In other words, it can change the experience of intimacy.

Seventhly, sensory deprivation is often used in the form of blindfolds in military interrogation or torture scenarios to deliberately disempower the "victim" and empower their torturer or interrogator.

Sight is most commonly deprived using a blindfold. While in some circumstances you might just turn the lights out, such as to defeat an escape-artist submissive who always seems to get themselves out of rope bondage, this can disadvantages the dominant as well. Blindfolds are extremely common and are readily available in your local sex emporium. 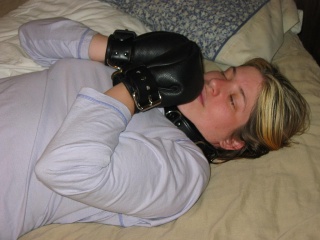 Figure 2. Mummification using PVC tape. The tape is applied from her ankles to her shoulders thus reducing the amount of sensation they can receive via touch 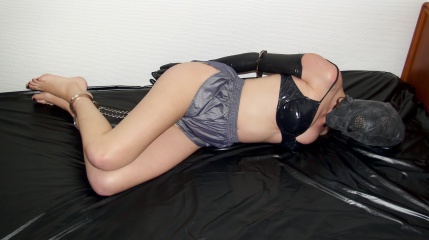 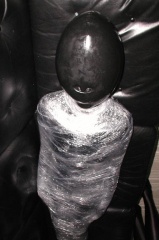 Figure 4. A female bottom in kitchen-wrap mummification and an inflatable hood

Touch deprivation can be achieved locally, such as just for hands, or over the whole body of a submissive.

Figure 1 shows a female submissive wearing bondage mittens. These are thickly-padded, fingerless gloves which are secured around the wrist so they can't be pulled off. As well as limiting sensation, they also make it next to impossible for the submissive to hold or manipulate anything with their hands, such as to hold a glass of water, to go to the toilet, to eat, to open doors, and so on.

Part of the psychological effect from bondage mittens comes from the frustration involved. The submissive might be able to see what they want to do, they just can't do it. If they want to touch or caress their partner, they can't feel them. This can also create feelings of helplessness.

One interesting aspect of mummification using kitchen wrap or PVC tape (as shown in figures 2 and 4) is that you can vary the amount of sensation lost by changing the number of layers of wrap you apply. One or two single layers of kitchen wrap, for example, are too thin to remove much sensation, but are very effective at immobilising the bottom or submissive. More layers are required to remove all sensation.

One little-mentioned, but important, element of sensory deprivation when you're using it to hide what you're doing from your submissive, such as by blindfolding them, is that they can often get an idea of what's happening by feeling the heat of your body or arms when you are close to them, and of the movements you make by light currents of air they feel against their skin. Mummification is quite effective at preventing them from feeling these.

We use sight and touch mostly when things are in front of us and close. For things happening out of sight or further away, we more and more rely on sound. Sound deprivation, therefore, means that our bottom or submissive loses awareness of what's happening beyond their immediate vicinity. They also feel isolated because they can't hear words or communicate effectively. This can be very disempowering.

It's easy to trick a submissive who can't hear because if they can't see or touch something, they don't know it's happening and so they can be kept ignorant of things going on behind their back.

Earplugs, hoods (see figures 3 and 4), and even partial mummification of the head are effective here.

While taste and smell deprivation are hard to use effectively as part of deprivation play, it's notable that smell often contributes significantly to someone's overall experience. For example, when one factor of a male submissive's arousal is the perfume his partner wears, or when a female submissive is aroused by her male partner's cologne, blocking their nose can be experienced as something between frustration and even torture, particularly when their nose is blocked part way through a scene.

Perhaps more cruel is allowing a submissive to become very hungry while anticipating an upcoming and favourite, aromatic meal, and then blocking their nose after the first few whiffs so they have to eat it without the smell. Smell is often a powerful part of the taste and eating experience, and blocking someone's nose can be a way to make the experience cruelly bland.

One effect of sensory deprivation, particularly where it involves one or more of the big three (sight, touch, or sound), is that the submissive's focus will change so they pay much more attention to the remaining senses as they try to complete their picture of what's going on around them.

This is useful for psychological manipulation because, for example, when a submissive can't see, they rely more on sounds and these can be intentionally created to mislead.

It's commonly the case that depriving someone of just one or two senses increases their focus on their surroundings, heightens their other senses, and can increase their apprehension and alertness. On the other hand, when most senses and stimulation are removed the result can instead be that the person relaxes, often going into a calm or even meditative state. This is often the whole point behind the use of floatation tanks.

When designing a sensory deprivation scene, it can be useful to keep this in mind because if you're intending on doing some mind games and you deprive your partner of too many senses they may just "float away" instead of achieving the state of arousal or excitement you wanted.

Combination with other play

Additionally, sight or sound deprivation can cause a submissive to feel constrained, confined, or enclosed. Bondage can reinforce this.

Gags are commonly combined with sensory deprivation involving the head (such as sound deprivation).

With some people, profound sensory deprivation where most senses are diminished can cause them to become afraid and panic. If this happens, the best solution is simply to uncover their eyes to restore their awareness of their surroundings.