Permanent and semi-permanent attributes and characteristics

A first step to understanding identity is that it is what a person thinks themselves to be. This includes their:

These attributes tends to have some permanence. In other words, they can't easily be erased by vague fortune---such as through losing one's job, separation from one's partner, etc.

On the other hand, some people see themselves in terms of less permanent, or even transient attributes such as:

The total collection of these attributes, skills, characteristics, etc., define the individual that the person considers themselves to be. Some of these attributes become critical to the structural stability of the person's identity. For example, if the person can play the flute but this isn't terribly important to them, then someone else demonstrating far greater flute-playing skill is not going to cause their self-perception to waver or weaken.

On the other hand, if the person thinks themselves to be quite bright and their intelligence is important to them, then someone else coming along with both far superior knowledge and thinking skills is going to be a cause for psychological difficulty. We might even start to see behaviour such as denial and avoidance as the person tries to prevent his inadequacies being thrust in his face.

When this is the case, it can be fertile ground for psychological activities such as humiliation.

Some characteristics and attributes of a person are known to them while some are not. A person's formal education and qualifications, for example, are things which they probably know well. Likewise, they'll have some good idea of their cultural heritage, the area in which they grew up, the sports they've played and so on.

As well as the characteristics and attributes of which a person is consciously aware, there will be many, many more of which they are not aware.

Commonly these will include values, behaviours, habits, and ways of thinking which they have unconsciously learned throughout their lives, such as ways of speaking, their accent, their dialect, mannerisms, gestures, values, priorities, beliefs, and so on.

A person will generally not be aware of many of these things. They may have never needed to notice something such as, for instance, the way they speak, or the mannerisms they use when talking to particular people. Some of their behaviours may be related to unfortunate experiences in their past which they have suppressed or which they deny. This may not stop the behaviour, but the cause is lost to them. 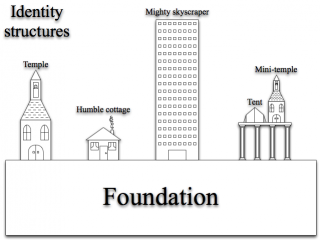 Examining the diagram on the right (click for a larger version) we can see a solid foundation at the bottom of the diagram which supports a range of structures. In the middle of the diagram we see an office block. This might represent a person's professional abilities which are built on a solid foundation of innate intelligence and possibly natural physical aptitude in the case that the person is something like a carpenter, artist, or metalworker.

Examples of characteristics or attributes which are typically structural:

Looking more closely at these, we can see some of the structures that can be built on these foundations:

The structures which we build on our foundation tend to be of two types:

Other characteristics and attributes can be non-structural. In other words, they aren't vital to any particular aspect of the identity.

It is frequently the case that some of the components of our identity are built on, not the base foundation, but on top of other structures which we have built. This can introduce some instability.

On the right-hand side of the Identity structures diagram (above) we can see a tent and a small church built on a small platform held up by a number of columns. As earthquakes have revealed in the past, columns can be very nice, but can easily topple.

Consider an example where a teacher in an isolated community has built a music school based on his perception of his skills and ability as a teacher. When a clearly better musician arrives, this shakes the foundation on which he has built his teaching, and can even bring down the whole platform on which the temple of his teaching was constructed.

This is fertile ground for humiliation.

Baumeister and Boden[1] note that "self-concept is a large and complex entity---much too large and complex to fit into consciousness at any given time." This means that the whole of our identity can't be active all at the same time. For example, the skills, abilities and attitudes which we need to be a good parent aren't needed when, say, we are immersed in a game of tennis. It doesn't mean that we stop being a parent, just that this part of what we are moves in to the background to let the tennis-playing part of our identity come to the fore.

As a further example, the attitudes, skills and feelings which we call upon and use as a dominant or a submissive need to be in the background when we are involved in a meeting at work, when we're queuing to by a train ticket, or when we're browsing for new bathroom fittings. The dominant or submissive in us does't go away; it just moves towards the back to let other skills and attitudes to come forward.

The ability to move skills, abilities, attitudes, and feelings back and forth---to bring them forward or put them in the background---is identity management. We use various techniques and strategies to accomplish these switches.

In our modern complex world, the process of maintaining the bits of our identity which are relevant and appropriate to the wide variety of situations in which we find ourselves can be a hard work. It becomes even harder when circumstances require us to call upon skills, abilities, and attitudes which we either don't have, or which we do have but which aren't particularly well developed---such as needing to deal with a submissive in a crisis with which we have limited experience, or needing to substitute for a colleague doing a presentatation when we are uncomfortable talking in front of a group.

Some characteristics and attributes

Here are some more characteristics and attributes which someone might use to identify themselves.