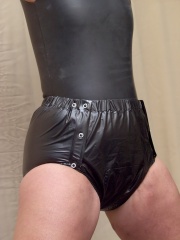 Regression often appears in one of two ways:

Progression also often appears in one of two forms:

One common scenario in age play is where a "child" is punished by their "teacher". This is a common schoolroom scenario and has spawned many a love affair involving canes and wooden desks. In terms of power disparity this comes in the form of the teacher" exercising their right to discipline the "child". It can also involve an air of humiliation, particularly when acted out in a schoolroom-type environment where the naughty child is compelled to pull up her skirt or drop his trousers and bend over a desk for a few severe strokes of the cane. Humiliation can appear when a "child" is chastised by a "parent" or "teacher" for soiling their pants or diaper.

While sex may play a part in age play, for many people it is the interaction of "parent" and "child" which is satisfying. Sex can interfere with this, particularly where the "child" is actually attempting to regain childhood innocence or simplicity rather than merely to pretend to be a child to have a sexy effect on their partner.