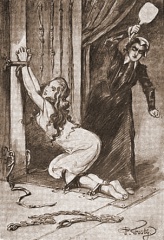 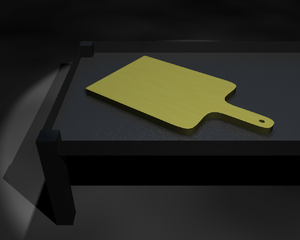 The surface of a paddle is generally the size of one or two hands stretched out flat, and is either rigid (as in a table tennis paddle) or flexible (such as when it's made out of thick leather). Sometimes studs will be added to the surface of the paddle to enhance the "effect" when striking.

The use of paddles is, of course, a form of impact play. Like spanking and caning, it can be a part of punishment or discipline scenario, particularly when playing out a naughty schoolgirl or naught schoolboy scene in age play.

Right and wrong ways to paddle

When using a paddle, you should be careful not to strike in such a way that the edges of the paddle, which will often be rough or sharp, bite into your submissive's flesh causing abrasion or bleeding. The diagrams below show the right way to hit, and a couple of wrong ways.

The left-hand diagram, with the green tick, shows the paddle centered over one buttock cheek. The main point of contact will be the center of the paddle, and the edges of the paddle will be above, but not contact, the so-called gluteal cleft(*), the crease between the buttock and the thigh, and the lower part of the back.

On the other hand, the center diagram shows a paddle strike which will bite into the upper thigh, and the left-hand diagram shows a strike where the upper and lower edges of the paddle will likely make contact with the gluteal cleft.