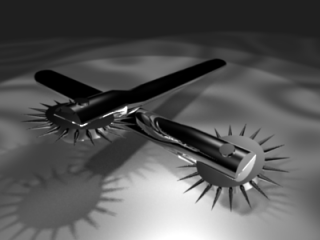 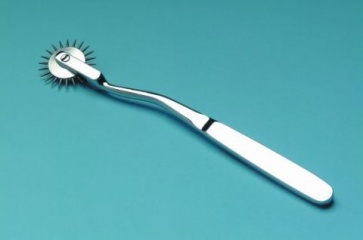 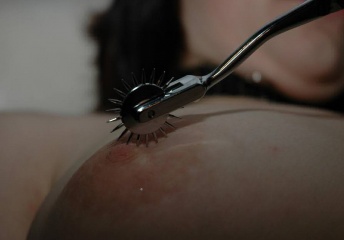 A Wartenberg wheel being rolled across a nipple

The Wartenberg wheel (also called a Wartenberg pinwheel or Wartenberg neurowheel) is a device originally designed for medical use in neurological testing. There are two parts to a Wartenberg wheel. The first is a small stainless steel wheel with sharp spikes around its edge. The second part is the handle. The handle is also made of stainless steel. In use, the wheel is rolled across the skin to create various sensations depending on how hard it is pressed.

Because of their appearance they can have a significant psychological effect, especially when rolled across very sensitive and intimate areas of the body such as nipples and genitals. One particularly sensitive spot, possibly because the submissive or bottom can't see what's going on, is the tract of skin between the cunt or cock and the anus.

Being metal, a Wartenberg wheel can be used in combination with a T.E.N.S. unit or violet wand as an electrical path between the unit generating the electrical current and the submissive. The electrical current can significantly heighten the sensation from the spikes. When used this way it can be a good idea to insulate the handle or for the top to wear insulating gloves.

While not a particularly standard use, a Wartenberg wheel can also be stored in a refridgerator and then used chilled.

Warning: It's possible to buy cheap "Wartenberg wheels" in sex shops and similar boutiques. These are often poorly constructed, and are typically "de-fanged" by having stubby blunt spikes. They may also have plastic handles which render them useless with T.E.N.S. units or violet wands. They can also be hard to properly clean and disinfect.