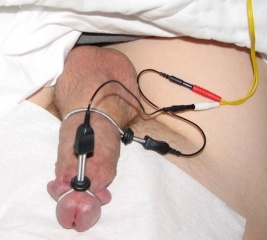 A penis wired up for electrical stimulation 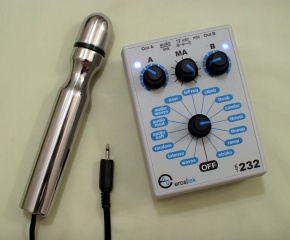 As shown here, one form of electrical play has the submissive connected to one electrode of a stimulator and their dominant to the other. The dominant can then use their fingers or other parts of their body to complete the circuit and allow current to flow through their submissive, such as through their nipple

Firstly, let me say that the use of electricity is potentially dangerous, even fatal (see report under "See also" below). Use with caution.

A third, less used, electrical device is the radio-controlled dog training collar. This is a small radio receiver and battery attached to a dog collar. Two electrodes extend from the receiver through the dog's fur and make contact with the skin on the dog's neck. When activated via the remote control the receiver administers a brief electrical shock to the dog. The more expensive versions of these collars offer a control range of hundreds of metres and up to ten different shock levels. Many receivers can emit a number of different audible tones in additional to shocks. These tones can be useful signals---such as "Come here!" or "Sit!"---instead of punishment or discipline.

With the aid of tape or when enmeshed into rope bondage the receiver's electrodes can press up against virtually any part of the body such as nipples, clitoris, etc.

Electro play is, of course, done with electricity and electricity can be harmful or fatal if not used safely.