Animal play allows the participants---the dominant and their submissive---to express things or behave differently than they might when not "in role". For example, a kitten is typically mischievous and difficult or impossible to control or train. A pony, on the other hand, can be dressed up and taught to perform. Animal play can therefore be a useful way to demarcate completely different ways of behaving. For example, a service-oriented submissive can completely escape the service role by entering into a kitten role. The expectations placed on them by themselves and their partner are completely different in both cases while still retaining the disparity of power characteristic of BDSM.

Objectification can be a significant part of animal play as it allows the submissive to reduced from human. Engaging an animal is inherently simpler than engaging an adult human. This means that any "vocabulary" used between the dominant and the submissive is also reduced to simple verbal commands, gestures, tapping with a riding crop, tail-wagging, whinnying and so on. Enforcing or requiring this simpler interaction can directly relate to achieving subspace which is often itself a simpler or less active state of mind than normal.

Animal play creates opportunities for other forms of play to combined with it. Humiliation can be part puppy toilet training, for example.

Even when not behaving or presenting as an actual animal a dominant may engage their submissive in animal-like terms such as, "my pet," or "kitten," and these can represent an underlying leaning towards objectification or reduction of the submissive. Likewise, a submissive may display animal characteristics without fully entering an animal role to also partially reduce themselves---mischievousness or friskiness, for example, are not uncommon in some submissives. 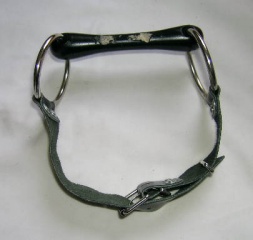 A pony bit with short leather straps suitable for use on a human pony. Note the teeth marks

This is mostly because these are animals which characteristically are involved with people through service, playfulness, or mischievousness.

There are also animals which don't appear in animal role playing. These generally don't have any close association with people. They include: