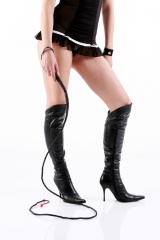 It typically involves a top repeatedly and regularly striking the back of a physically restrained or immobile bottom with a swinging motion using a whip.

Whips are used single-handed and consist of a rigid or semi-rigid handle, from which extents a single braided leather tail. The tail will commonly be from one to five meters long.

Whips have traditionally appeared in cowboy shows where they are cracked. Cracking a whip is where the whip is swung in such a way that the tip will move (briefly) at supersonic speed, thus creating a cracking sound.

Even though the material used in a whip may be soft leather, when the tip is moving at such speeds it can easily cut bare skin.