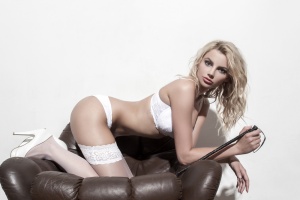 Many, if not all dominants, masters and mistresses are familiar with an expectation to perform. This is particularly the case when there's a strong physical component to the relationship they have with their submissive or slave.

After all, a submissive or slave signs up to be with a dominant or master because they have a need or desire they want met. There's sort of an implicit understanding that this is actually going to happen and that the submissive's needs will be satisfied.

You can't just satisfy a submissive once however. In any sort of ongoing relationship the dominant needs to do it over and over again. Their submissive, on the other hand, might just need to take off their clothes, do what they're told and be receptive.

OK. So I'm deliberately trying to make this sound one-sided here. What I'm trying to get at is that dominants and masters are the ones who nominally have the authority to make the decisions. It can feel like a lonely place and this "burden of command" can be something they experience very strongly.

This can end up creating a type of performance anxiety. I'm not talking about not being able to get one's end up, but instead I'm talking about the possible doubts about being able to sustain the dominance, maintain the passion for the rope, be demanding in calls for service, and basically bring out on demand the power which both they and their submissive need and hunger for.

This expectation to perform, and its sometimes concomitant fear of not being able to, is typically self-induced. Of course it shouldn't be this way.

Particularly for the dominant, but also for the submissive, it's important to remember that all of this dominant/submissive and master/slave stuff is a team effort and that each member of the team is human and mortal. The teams are usually teams of two. And the two people involved are not playing against each other. They're on the same side.

It might be that the dominant is the team captain, but the submissive is not just there as decoration or as muscle. They have a mind, feelings and their own experiences. In some cases they can even be more experienced than their master. They do contribute and, importantly, this means that their dominant or master is not alone. Dominants, keep this in mind.

The pressure to perform which the dominant can experience can come from a number of places. I'll mention just two of them here.

The second has to do with a mistaken idea, typically associated with ego, that the dominant is Superman.

As to the first, what you're there for, and what your submissive is there for, is so that you can be dominant. If something hasn't worked out, or if you're not feeling well, or if you just aren't in the mood, take charge of the situation. Don't force yourself to do something. If you force yourself to engage your submissive and the appropriate juices aren't flowing then it won't feel right and it especially won't be as satisfying for either of you than it would be if you waited for the right time.

As a dominant, don't expect to be able to be dominant all the time. Sometimes it doesn't happen. Sometimes the dominant thing to do is to make an executive decision and go out and have a coffee instead.

Secondly, being a dominant often has to do with control, and if ego is controlling you and making you try to be a dominant when you're sick, tired or just not in the mood, then you're not really in control. In fact, with your ego in control combined with a need to perform, you might just end up being completely sucked dry. It has happened many, many times before to greater supermen than you.

On the other hand, if you've spent the last two weeks building up your submissive's expectations for tonight, teasing them and taunting them, and working them up into a lather of anticipation, and then when they knock on the door you tell them that you've changed your mind and are just taking them out for tea and scones at the local all-night cafe, then you deserve everything that's coming to you.