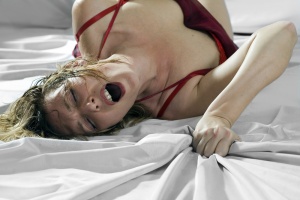 My dictionary defines sadism as "the tendency to derive pleasure, especially sexual gratification, from inflicting pain, suffering, or humiliation on others."

I think that there's an important disconnect here between What It Is That We Do (WIITWD) and sadism (or masochism).

I've had a number of discussions with people about this and once, when I had this written prominently on the main page of my website, I had a stranger write to me and earnestly berate me because, he claimed, he and his friends just looked for pain. I think he was wrong.

Pain hurts. That's what it is designed (in the Mother Nature-sense) to do. It's not meant to be nice and I argue that it never is.

But pain can lead to good things. It can be educational, as in "That was a bad idea and I won't be trying that again". Or one of the current drums I beat is that pain also has the ability to push away the rational parts of our minds and expose the primal parts and give them a very good airing. This outcome is, I think, a very good thing. In fact, I think it is a very, very desirable thing.

We sometimes use pain to get to that end game, but not always.

If we consider ourselves as sadists because we "get pleasure out of inflicting pain" then I'd argue that we're not seeing the whole picture. For example, if I were to say that I use pain to help my girl find surrender, enlightenment and discover herself and I am very happy when she does, then no one would call that sadistic.

If I were to say that I use pain to help my girl uncover her primal core and have Earth-shaking orgasms that would make even Vesuvius feel ashamed, then no one would call that sadistic either.

But if I leave out the bit about the outcome and just say, I like inflicting pain on my girl, then it really does sound sadistic and I am doing a disservice to myself, my goals and my girl.

And I think if we talk about us being sadists, then I think we're doing the same. We're minimising what we do. We don't just hit someone so that they go, "Ouch."

Which leads me to say: I am not a sadist.

I am, however, very interested in personal growth, enlightenment, satisfaction, education, self-actualisation and empowerment. If pain forms part of the road to get there, then I think it's just as valid as training, discipline, bondage or whatever.