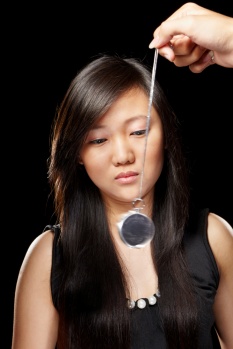 ↑Hypnotising a young woman with a swinging watch

In popular media hypnosis is sometimes characterised as what could be called a zombie-like state---glazed eyes, blank facial expression, etc., with the person concerned having no idea about what happened during the hypnotic trance after they are woken up.

In reality, it is typically not like that at all.

A person who is hypnotised is not asleep or unconscious. Instead, they are in a state of intense focus---often focussing so intently on the voice of the hypnotist or on what he has directed them to do that they are unaware of what is going on around them. They also experience heightened suggestibility where they are more likely to follow directions and to a greater extent than when they are "awake".

While it's common, particularly during induction and deepening, for a person to be very relaxed as they are being hypnotised, good subjects, once in a deep trance, can be just as active and animated as someone who is awake.

It is the intense focus which can prove particularly useful when combining hypnosis with sex because it allows the person in the trance to be more sensitive and sexually responsive than they may otherwise be. The ability of the hypnotist to direct their focus also allows the person in the trance to participate more fully in any fantasies or role-playing[1] scenarios in which they are engaged with their partner.