There are a number of differences between the approach to and experience of hypnosis when you go to a therapist for treatment to, say, help you give up smoking, and when your partner hypnotises you as part of sex play.

↑The level of intimacy is very different in a hypnosis session where sex is the order of the day... 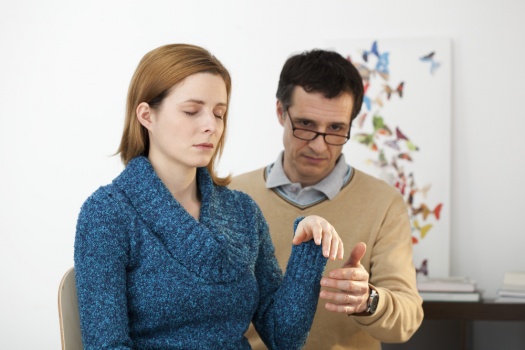 ↑... when compared to a therapeutic session.

The level of intimacy that you expect is, of course, vastly different, but there's more to it than that.

When you are visiting a therapist they want you to be comfortable, relax and just sit there while they talk to you and maybe instill in you some post-hypnotic suggestions to decrease your desire to smoke. A session with a hypnotherapist is typically very physically passive as far as you're concerned and they don't aggressively take control and start telling you what to do.

On the other hand, when your partner hypnotises you as part of sex play, you are usually going to be active and certainly sexually responsive--both things that you are probably not in a therapist's office.

To be active while in a trance requires that the person hypnotising you takes a different approach to getting you in the trance than does a therapist. Instead of focussing on getting you to relax as much as possible (and thus leave you like a dead fish once you're in the trance) your sex partner needs to focus on maintaining physical control while still getting your mind to open up to their suggestions. The words they use are part of it, and regularly exercising you is another part.

For example, a therapist might be saying things like the following to you as they hypnotise you:

The therapist will continue simply relaxing you along these or similar lines until they feel you are in a deep enough trance for that they need to do with you. This approach gives a good level of trance but it also leaves you, the subject, so physically relaxed and detached that you can't actually do anything physically (like move) or think clearly. Of course, it isn't the therapist's goal that you be able to walk around their office or hold deep and meaningful conversations so this type of deep relaxation isn't a problem in that context.

On the other hand, unless your partner is into ichthyological necrophilia[1], you probably want to be active and responsive. Instead of using the same sorts of words a therapist might use your partner should be instead saying things like:

While doing this your partner should be also regularly giving you little tasks, exercises and challenges to do (such as those where I write about exercises[2] and deepening the trance in Look Into My Eyes) so that you stay physically capable while still going into a deep trance.

By using both using a choice of "active" words while hypnotising you, and by regularly directing your physical actions at the same time, your partner can end up with you in a deep trance but still capable of physically and mentally responding to your fullest ability.