This is cute and easy. What happens, as far as your partner is concerned, is that a piece of their underwear (like their bra or underpants) actually disappears while they're wearing it. It's a big surprise and it's most effective, and their reaction is best, the first time you do it with them. After the first time it won't be such a surprise. 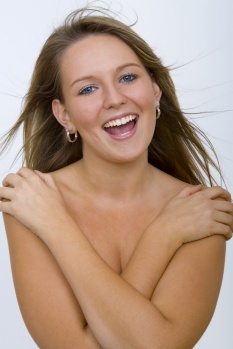 ↑"Wasn't I just wearing a blouse and a bra?"

It's actually quite simple. You hypnotise your partner, have them remove their clothes and the piece of underwear you're interested in and then put their clothes back on. You hide the underwear. Then you give them a post-hypnotic suggestion to not remember anything about this trance and then wake them up. Then get them to check that they're still wearing it. As they don't remember the trance they also don't remember what happened during it so it'll seem like they're suddenly not wearing that piece of underwear any more.

This does require that your partner can go deep enough into a trance to be able to accept the post-hypnotic suggestion. This level of trance is commonly achievable, but you'll need to have hypnotised your partner a few times previously and be used to them in a trance for this to work.

This trick is also much easier if you have already trained or conditioned your partner to go into a trance on a signal. How to do this is contained in Look Into My Eyes so I won't repeat it here.

How to do it

Wait until you and your partner are in some innocent situation, maybe in your dining room or while watching TV. Then put your partner in a trance and spend a bit of time deepening them. Once you're comfortable instruct them to remove enough of their clothes so that they can take off the piece of underwear you're interested in. Take it from them and hide it. Then have them put their clothes back on.

Now it's time to wake them up, but before doing so give them the following post-hypnotic suggestion:

Repeat the post-hypnotic suggestion a couple of times and then wake up your partner. They should be unaware that anything has happened and may not even notice that their underwear is missing. Find a way to point it out to them and then watch their face.