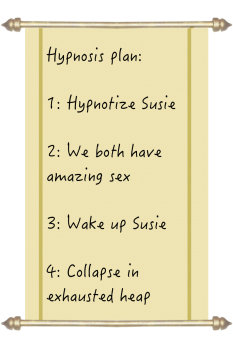 A script in the context of hypnosis is the words you use to give your hypnotised partner or subject commands or post-hypnotic suggestions.

It's typical for someone in a hypnotic trance to need to have things spelled out to them and so most scripts should be simple, clear, precise and unambiguous. Getting this right can take some practise as someone in a trance will tend to be unexpectedly far more literal-minded than someone who is awake and this can cause problems.

One of the common tests for depth of trance is to get your hypnotised subject to open their eyes. This lets you see how relaxed they are and if their eyes attempt to focus. In a deep trance their eyes won't focus. However, if your subject is sitting in a chair then almost certainly their head will be lolling forward, maybe even so far as to have their chin resting on their chest. Telling them to open their eyes then doesn't really get you anywhere because with their head in that position you can't actually see their eyes at all. What you should do is tell them to list their head up straight and THEN open their eyes.

In another example you might have told your hypnotised subject to stand up and do something---such as dance or comb their hair. You then might want to get them to sit down so you can deep the trance a bit before you move onto something new with them. If you simply say, "sit down", they're most likely to sit straight down on the floor where they are instead of going back to their chair as you probably intended. To get them into the chair where you want them, you should either lead them there, such as by taking their arm and guiding them there, or you tell them explicitly where to go.

When you're new to using hypnosis, scripts are an important part of getting a good outcome with your partner during a hypnosis/sex session. Scripts can spell out what to say and do during the session, and they're useful because in the heat of the moment it can be difficult to come up with right words or actions and you can be left feeling like you've lost control.

Depending on your level of skill or experience, preprepared scripts can outline a session in broad strokes, or can go into fine detail about every single planned step.

For a more detailed discussion of scripts in relation to post-hypnotic suggestion follow the link below: